My March 8 web page “a trace of spirited time” resulted from notes that related to several home page postings, Feb. 8 through Feb. 23, that were made into one blog posting: “being a spirited democrat. But the web page was a very different kind of thing, even before I did major revision March 12.

The days following that were occupied with organization of notes from my entire winter, which gained tens of headers and sub-headers, looking “worse” than the table of contents of a Heidegger lecture course—not that I’m being Heideggerian; but there’s nothing like a Heideggerian course outline.

January 27: I’m overwhelmed by news. I promised a substantive update for today, but I’m still too overwhelmed. So many topics!

“being in Time”! (That will get developed.)

If I worked as a news Editor, I’d likely be in poor health.

But I don’t—and I’m thriving!

I have a path in mind, but presentational organization depends on a gestation that’s not yet complete enough.

I know: Vague confession is so helpful.

January 13: As if I could appreciate many languages... 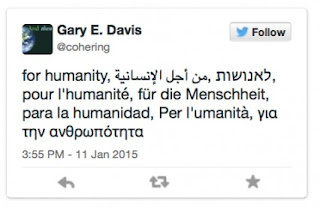 However, the value—and synergy of value and species in—humanity is a great conception in which all languages belong. We do transcend the primates. Exemplify intelligent virtue of the Earth.

• Jan. 12: Cultural resources are not “capital”

• Jan. 13: What can philosophy do?: response to a philosopher in Argentina

January 6: A sense of trans-pragmatic philosophy was posted. It’s not at all a comprehensive sense of pragmatics that I anticipate (Jan. 4 note below).

January 4: Though “2-fold, 3-fold, 4-fold—onefold?” was written today, its trOpical mentality is decades old for me. The posting implicitly anticipates a sense of pragmatics that is basically conducive to educing development, fruitfulness, flourishing, etc. across a large scale. But it was improvised. Up the road, I want to be much less informal, in light of cognitive science. (Well-formedness is a good thing in philosophy, you know.) A comprehensive sense of a pragmatics of conceptuality would have to be very long.

December 28: Ever had your computer crash when you’ve neglected to back up hours of work? That didn’t happen to me, but an equivalent panic happened after I installed Mac OS “Yosemite” and my web software was unopenable.

Problem solved, but I need soothing. I’m continuing to have “fun with my purely philosophical venture,” exuberantly so—importantly so, I’d like to believe. You know the feeling of “Eureka!” after strugging long for the gestalt click. I’m having those daily. It’s exhilarating. I can’t educe the feeling with an example, but here’s an example: “a 3-fold ambiguity of ‘cognitivity’.”

home and another blog